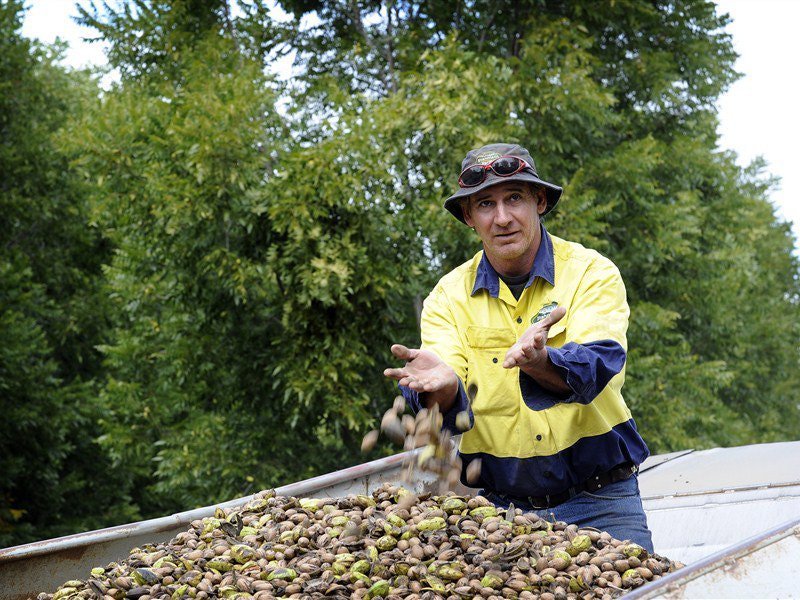 In 1965 Deane Stahmann Jnr came to Australia with the intention of creating the first commercial pecan operation in the Southern Hemisphere. He planted the first pecan trees at Gatton in Queensland, and shortly after at the flagship property 'Trawalla' near Moree in New South Wales. Stahmann Farms was originally established in Las Cruces, New Mexico, in 1932 by Deane Stahmann Snr. He and his sons, Deane Jnr and the late Bill Stahmann, planted the pecan trees (pronounced p'cahn in southern USA) on a vast property still operated by the family.

His dream of creating a new industry was realised in 1982 when the Toowoomba processing plant began supplying the finest quality processed nut kernel from these farms to the world.
Since that time, Stahmann brand has become entrenched in Australian supermarkets.

The plantation produces 95 per cent of Australia's annual pecan crop, harvested mechanically from May to July. Currently, the Pecan Nut Farm has over 95,000 trees.

There is a three hour tour Featuring Stahmann's Pecan Nut Farm, 'Trawalla' the largest and most productive Pecan Nut Plantation in the southern hemisphere (accessible strictly by guided tour). Included in the tour is a pecan nut taste testing and you will receive a pecan recipe booklet and a Moree Township familiarisation. The tour includes courtesy pick up and return service to any accommodation house or destination in Moree.